Yesterday, Sunday, October 14th Archbishop Oscar Romero became the first Salvadoran Saint.  In the ceremony at St. Peter’s Square in the Vatican, Pope Francis praised Romero for having “left the security of the world, even his own safety, in order to give his life according to the gospel — close to the poor and to his people.”

Archbishop Romero was assassinated on March 24th, 1980 as he celebrated Mass.  A passionate advocate against social injustice and oppression in El Salvador, he sought peaceful solutions and acted as a voice for the poor.  He is now considered a martyr of the Church.

The funeral Mass for Oscar Romero was celebrated at the Cathedral of San Salvador on March 30, 1980, Palm Sunday.  An estimated 100,000 people gathered in the square outside the Cathedral and bishops from around the world were in attendance to honour Archbishop Romero.  During the Mass smoke bombs and gunfire were aimed at the gathered crowd.  Many people were killed and hundreds were injured. 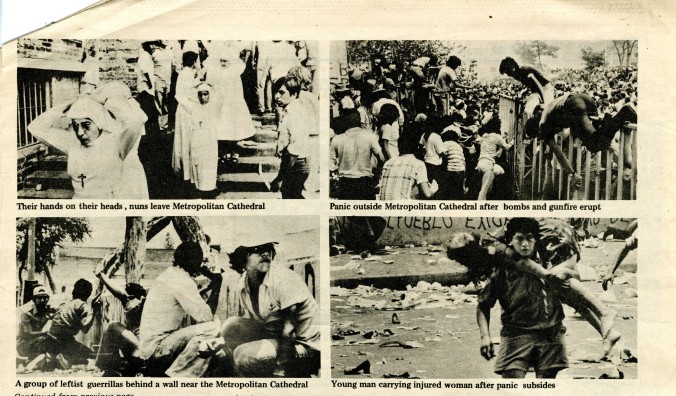 Bishop Paul Reding, the seventh bishop of the Diocese of Hamilton, was in attendance at the funeral as the representative for the Canadian Conference of Catholic Bishops (CCCB).  He was joined by Fr. André Vallée, the French-language General Secretary of the CCCB.  Bishop Reding served as one of the main concelebrants during the Mass, along with five other bishops representing different countries.  He was seated just behind the altar and to the left of the coffin when the gunfire interrupted the homily being given by Cardinal Ernesto Corripio Ahumada, who had come as a special representative of Pope John Paul II.  The chair Bishop Reding had been sitting on was quickly destroyed by the rush of people scrambling to seek safety in the Cathedral.  He was knocked down and carried into the Cathedral by two Boy Scouts who had been on hand as crowd control. Bishop Reding estimated 10,000 people were pressed into the Cathedral for refuge.  They remained together, praying, caring for each other, and trying to stay calm for over an hour.  Once the threat to life ceased, Archbishop Romero was interred in the crypt in the right-hand transept of the Cathedral.  Those still in the Cathedral were advised to leave with their hands over their heads so they were not mistaken for combatants.  (B7.008)

The experience had a profound impact on Bishop Reding.  In his correspondence he expressed “it was one of the most harrowing experiences I have ever had in my life”, adding that

“I truly believe that I will never be the same because of the great lessons I learned during that short trip”.  (B7.001.117)

The events impressed upon Bishop Reding “the price that some Christians have to pay in order to be true followers of Jesus Christ and His commitment to the poor and oppressed today”. (B7.001.117)  Reding was particularly moved by the words of a young woman at the airport as he was set to leave San Salvador for the respite of home.  The woman asked him “to remember her and all the people in [his] prayers because they experienced this oppression on a regular basis”. (B7.001.117)

Bishop Reding joined Bishops from around the world in Testimony of the atrocities at the funeral as witnessed by those in attendance.

Bishop Reding’s signature on the Testimony from ecclesiastical delegates (B7.008)

Oscar Romero was one of the 75,000 lives claimed in the Salvadoran civil war that lasted until 1992 and ended with the signing of the UN-mediated Chapultepec Peace Accords.

Bishop Reding spoke often about the impact of civil unrest in El Salvador following Romero’s death.  Reding supported the call Archbishop Romero had made in February 1980 to end US military assistance to El Salvador’s government.  Romero’s letter to President Jimmy Carter, in which he unequivocally denounced the military aid as a factor that would “intensify the injustice and repression of the common people who are organized to struggle for respect for their most basic human rights”, was considered Romero’s last wish and was backed by many Catholic institutions including the CCCB.

The Diocese of Hamilton also participated in a series of Ecumenical Memorial Services for Oscar Romero, with the first being held on April 13, 1980 at the Cathedral Basilica of Christ the King. 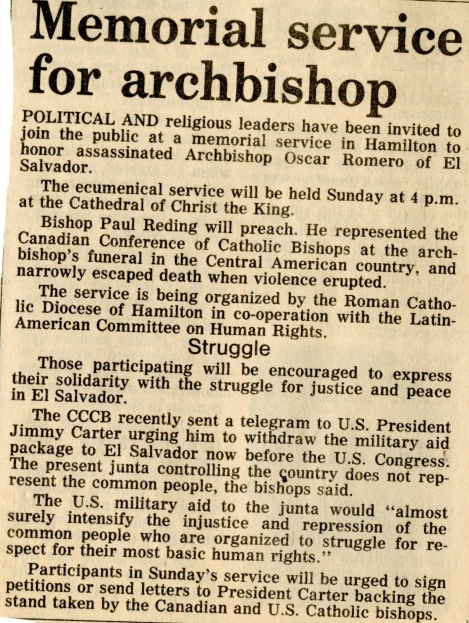 Political and religious leaders invited to memorial service for Oscar Romero, April, 1980 (B7.008)

The Bishop Farrell Library & Archives maintains a collection of records from Bishop Paul Reding including a series of newspaper articles, media statements, correspondence, and memorabilia related to Oscar Romero’s assassination and the civil unrest in El Salvador.  This includes everything from Bishop Reding’s plane ticket to San Salvador to a telegram offering thanks for Reding’s support and solidarity from Msgr. Ricardo Urioste, Vicar General to Romero.  The collection provides a wealth of information to reflect upon on this occasion of Oscar Romero’s Canonization.

Join the Bishop Farrell Library & Archives for the screening of the film “Romero” this Friday, October 19th at the Diocese of Hamilton Chancery Office (700 King St. West, Hamilton, ON).  The screening is the kick-off event in the 2018-2019 season of “Reel Justice” – a Development & Peace film festival dedicated to promoting social justice awareness.  The event is FREE and open to everyone!

Archives:
By appointment only
Join 26 other subscribers