There are many rewarding elements of being an archivist.  Discovering that one special item in a collection of long forgotten documents is definitely on that list.  In 2016, Archives staff were tasked with sorting through the remnants of an abandoned library that had belonged to previous bishops of the Diocese of Hamilton.  Out of the many books and periodicals that we reviewed we found only a single item of significance – but it made the process so worthwhile!  In this mess of materials, we pulled out a photo album with an inscription linking it to Bishop Peter Crinnon, the second bishop of the Diocese of Hamilton.

Bishop Peter Crinnon served the Diocese of Hamilton from 1874 – 1882

The photo album was in disrepair.  The binding and pages were grimy with surface dirt. The leather on the cover was beginning to wear at the corners and edges, in addition to splitting at the joints. The spine was broken and the clasps were tarnished.  Thankfully most of the photographs were in fair condition with only some chemical deterioration, such as faded images and blotchy discolouration.  We entrusted the album to the expert care of conservator Jennifer Robertson of Book and Paper Conservation Services.  The end result is a still fragile but repaired and stable photo album, with all of the photographs cleaned and documented.

The photo album was in disrepair and required conservation to fix the split binding and clean the grimy pages. Before and after photographs show the work completed .

The photo album contains 91 carte-de-visite, a popular format for photographs in the second half of the 19th century that involved adhering photographs to card stock.  The method was patented in 1854 by Parisian portrait photographer André-Adolphe-Eugène Disdéri and provided an inexpensive option for portrait photography.  Carte-de-visite were often traded or exchanged as gifts.  Images of celebrities and royalty could be purchased by booksellers or other vendors.  Many of these are still considered collector’s items.  The popularity of carte-de-visite was at its height in the 1860s, the same time frame as when our photo album was gifted to Bishop Crinnon.  The album predates Crinnon’s time as the Bishop of the Diocese of Hamilton.  It was given to him while he was a priest within the Diocese of London, where he served for 16 years. The inscription on the end page of the album reads “Presented to Very Rev. Dean Crinnon J.A. Kelly, O.S.D. London Sept 1867”. 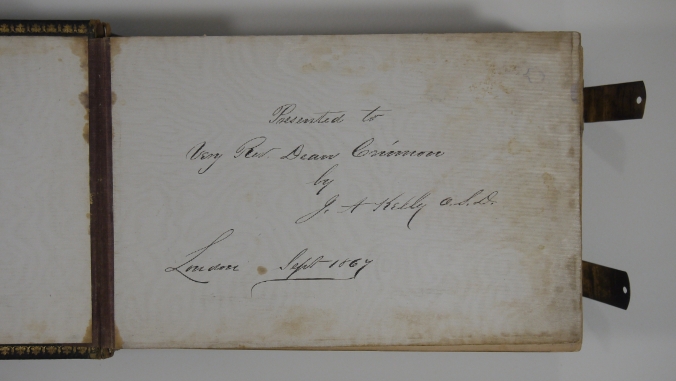 An inscription on the end page links the album to Bishop Peter Crinnon and Fr. Joseph Kelly

The presenter of the album, Fr. Joseph A. Kelly, O.S.D. was a priest from the Dominican Province in Springfield, Kentucky.   He was one of the first Dominican Friars to serve in Canada, which were active in the Diocese of London from 1861 – 1868.  Bishop Pierre-Alolphe Pinsoneault, the first Bishop of the Diocese of London, invited the Dominicans to the Diocese when he moved the seat from London to Sandwich (now Windsor).  The Dominicans were given the care of St. Peter’s Parish.  Fr. Joseph Kelly came to London in the summer of 1866 and was assigned as the Prior of St. Peter’s. He was known to have made good acquaintances during his time there.   He stayed until the Dominicans left the Diocese of London in January 1868, following the resignation of Bishop Pinsoneault.  Pinsoneault’s replacement, Bishop John Walsh moved the seat of the diocese back to London, regaining St. Peter’s as the Cathedral.  Bishop Walsh was ordained Bishop of the Diocese of London in November 1867 but he had informed the Dominicans of his decision to reclaim St. Peter’s prior to this time.  Fr. Kelly was aware of this upcoming change, noting in his diary on November 13, 1867 that the move was imminent. (Michael Attridge, Growth of the Order of Preachers in North America in the Nineteenth Century:  The First Dominican Friars in Canada, Toronto, 2017) Could the gift of the photo album to Rev. Crinnon been a going away present between friends?  The photo album opens up many avenues for further research.  What was the connection between Crinnon and Kelly?  Did they maintain an acquaintance after the Dominicans left Canada?

Many of the carte-de-visite are stamped with the name and contact information of various photography studios.  These include the renowned photographer William Notman from Montreal, local Ontario photographers such as James Egan from London and Eckerson Studios from Hamilton, in addition to studios from Ireland and the United States.  It would be fascinating to delve deeper into the histories of these studios and their impact on portraiture. 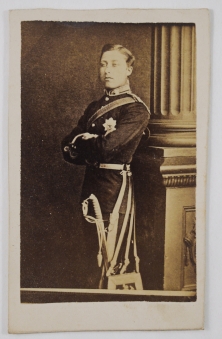 Our first question however, is who are the individuals in the photographs?  A few of the 91 images are identifiable such as the Diocese of Hamilton’s Rev. Edward Gordon, the first Vicar General for the Diocese from 1856-1862.  Other prominent clergy include Archbishop Ignace Bourget, Bishop of Montreal from 1840 – 1876 and Fr. Jean-Mathieu Soulerin, founding Superior of St. Michael’s College and Superior General of the Basilian Fathers in Canada from 1865 to 1879.  There are political figures such as Sir John A. Macdonald, first Prime Minister of Canada and Lord William Ewart Gladstone, Prime Minister of Great Britain.  In addition there are Royalty present with the inclusion of Queen Victoria and King Edward VII.  But there are many other figures that remain unknown.  The first step in our research is to fill in these blanks.

Can you help us to identify the individuals in Bishop Crinnon’s photo album?  View all the photographs in the Gallery of Images from the Bishop Crinnon Photo Album and then email us your answers at library@hamiltondiocese.com.

Archives:
By appointment only
Join 26 other followers