“Beauty also reveals God because, like him, a work of beauty is pure gratuity; it calls us to freedom and draws us away from selfishness.” Pope Benedict XVI

Art matters.  Beauty matters.  It’s heartening in this extraordinary time filled with fear, anxiety, boredom, frustration, to see so many turn to art, beauty, and the connections they build, as a balm to that unease.  Social media feeds are filled with people reaching out to each other virtually though music, dance, and visual art.  A few favourites include:

Some of the most beautiful items in the Bishop Farrell Library & Archives collections are a series of vestments.  Buried at the bottom of a cedar box for decades, they were an unexpected surprise for the rector at the Cathedral Basilica of Christ the King; a shock of beauty hidden under more mundane fabrics.  Vestments, meaning “clothing” in Latin are ceremonial robes worn by priests during liturgical services.  Deriving from the secular clothing of ancient Romans and Greeks, their current form was established by the 13th Century.  Vestments act to distinguish the priest’s role during liturgy from that of the everyday, as “he who performs a liturgical function does not do so as a private person, but as a minister of the Church and an instrument in the hands of Jesus Christ” (“Liturgical Vestments and the Vesting Prayers”, Vatican Online, accessed March 27, 2020).  They are also intended to be beautiful, as a means to contribute to the honour and glory of God, as are the music, architecture, images, and liturgical ceremonies of the Church.  (“The Noble Simplicity of Liturgical Vestments”, Vatican Online, accessed March 27, 2020)

Our archival collection of vestments consists of 21 items dating from the late 19th Century to early 20th Century, all heavily embroidered and many sewn through with metallic gold thread.  This includes chasubles, dalmatics, stoles, humeral veils, and maniples. The collection also contains corporals, altar cloths that are placed under the chalice and paten when the Eucharist is celebrated.  Several of these textiles were produced by Biais Ainé et Noirot-Biais.  This was a significant manufacturer of liturgical ornaments from Paris, France, which functioned under this name from 1897 until 1905 but whose history dates back to 1782.  A few of the dalmatics and humeral veils come stitched with the label “Manufactured expressly for the Altar Society St. Mary’s Cathedral, Hamilton”.  The dating of the vestments places them during the time of Bishop Thomas Dowling‘s tenure, the 4th ordinary of the Diocese of Hamilton.

Below are a few photographs of these exquisite vestments, as our small contribution to the sharing of beauty.  Let the artistry, rich fabrics, and detailed embroidery inspire! 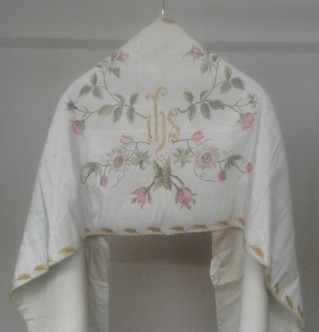 Archives:
By appointment only