As we enter another Christmas under the restrictions of COVID-19, it is hard not to be discouraged. Christmas is a time for gathering together, sharing in love and faith; a time for connecting. How can we go another year with limits to that warmth? But as we have all learned, caring for each other can also mean staying a part and putting the health of our most vulnerable first. Bishop Crosby in his Christmas Message, reminds us that the blessing of Christmas is the reassurance that God is always with us, even in our darkest moments: “we are a people of HOPE” (Bishop Douglas Crosby, 2021 Christmas Message). As Christians we have always been able to find ways to connect, especially during times of adversity. One small way during the COVID pandemic has been the broadcasting of Mass online. Many of the parishes in the Diocese of Hamilton have found technologically savvy and creative ways to share liturgies and maintain a sense of community. A list of available online masses can be found on our diocesan website. This means of reaching out is not entirely new for our Catholic churches. The benefits of audiovisual technology have long been utilized to help bring Mass to those who might not be able to attend. The Cathedral Basilica of Christ the King for instance has been broadcasting Christmas Midnight Mass to the faithful for decades, originally via radio and now through televised airings. Our blog post from 2018 “Christmas at the Cathedral” discussed preservation work to reformat audio recordings of the 1960 Midnight Mass. As we continue to search for ways to connect this Christmas season, it seems appropriate to re-share this post. Scroll to the bottom to hear the sounds of the Midnight Mass, celebrated in Latin by Bishop Joseph Ryan. Truly an amazing way to connect to our faith and history!

Christmas at the Cathedral

The Christmas Mass in the Roman Catholic, Anglican, and Lutheran traditions is distinguished by a three-fold celebration of the Eucharist.  Based on an ancient custom of the church at Jerusalem, the celebration of three masses includes the “Angels’ Mass” or Midnight Mass, the “Shepherd’s Mass” or Dawn Mass, and the “Mass of the Divine Word”, the Christmas Day Mass.  When adopted in Rome, the first of the three, the Midnight Mass, was held by Pope Sixtus III for a small congregation in the chapel of the Santa Maria Maggiore.  Midnight Mass has since become a favourite Christmas tradition for many.

View of the altar at the Cathedral Basilica of Christ the King, Christmas 2017

Participating in the celebration of Midnight Mass at the Cathedral Basilica of Christ the King in Hamilton, filled with hymns of joy and the splendor of the season, is a cherished experience.  For those unable to attend, a broadcast is provided to reach people within their homes.  This is now done via television but originally the broadcast was provided over the radio through CHML 900.

Audio tape recording of the 1960 Midnight Mass at the Cathedral Basilica of Christ the King, cellulose acetate, magnetic tape (P43.004-004.005)

One of the more exciting “finds” from the Bishop Farrell Library & Archives collection is a series of audio reel tapes containing the CHML Midnight Mass broadcasts from the late 1950s and early 1960s.   These were spotted many years ago but without the requisite technology we were uncertain if they still contained any audio.  Over the past summer we were fortunate to have the assistance of an intern, Aline Zara from the University of Toronto’s Faculty of Information Program.  With the addition of the extra hands and Aline’s superb insight and professional skills, we were able to feed our curiosity and set to work researching best practices for the digitization of the audio tapes.  It quickly became apparent that Richard Hess of Richard L. Hess Tape Restoration Resources was the expert in the field of audio restoration.  As the audio reels were extremely brittle, we wanted to ensure that the digitization of the contents was done with the utmost care and knowledge.  Following a few quick conversations and the impeccable work of Richard Hess, we received digital recordings from the audio tapes!  The sound on most is very clear, with limited distortion.  We are now extremely lucky to be able to share the sounds of the Midnight Mass, celebrated in Latin by Bishop Joseph Ryan, the sixth bishop of the Diocese of Hamilton.  Bishop Ryan served the Diocese from 1937 – 1973.  In these recordings you will hear the strong voice of Bishop Ryan in the prime of his tenure.

In this first recording Bishop Ryan recites the Kyrie eleison, Christie eleison, and Gloria in excelsis Deo at the 1960 Midnight Mass at the Cathedral Basilica of Christ the King.  The English commentary is provided by Rev. Matthew Meehan, CSsR.  Rev. Meehan was the host of a weekly Catholic radio program on CHML and later the Coordinator and Director of the Hamilton Diocese Radio-TV Office.

Homily given by Bishop Joseph Ryan at the 1960 Midnight Mass held at the Cathedral Basilica of Christ the King (B6S.013.002)

In Bishop Ryan’s homily at the 1960 Midnight Mass, he encourages all to offer prayers for the peace of the world, to live according to God’s Commandments, and to honour truth.  This Christmas message can be heard in the following recording, with the full transcription of his words available to read: Homily given by Bishop Joseph Ryan at the 1960 Midnight Mass

The full Latin Mass can also be enjoyed:

This year’s broadcast of the Midnight Mass at the Cathedral Basilica of Christ the King, celebrated by His Excellency, Bishop Douglas Crosby, OMI, Bishop of Hamilton, will be broadcast by Salt + Light Television.

Merry Christmas to all from the Bishop Farrell Library & Archives! 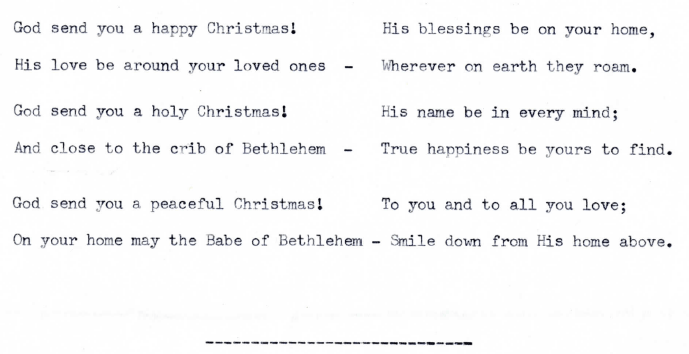 Archives:
By appointment only
Join 26 other followers