Today marks the start of Catholic Education Week in the Province of Ontario, which runs from May 5 – 11, 2019.  This is an opportunity to celebrate the unique identity and contributions of Catholic education.  Publicly funded Catholic education has existed in Ontario since 1841 and continues to provide a strong school system rooted in Catholic values.  The theme for this year’s Catholic Education Week is “Living as Joyful Disciples”, aligning with the scriptural message from the Gospel of Peter, “Although you have not seen him, you love him; and even though you do not see him now, you believe in him and rejoice with an indescribable and glorious joy.” (1 Peter 1: 8)

In the recent Pastoral Letter on Catholic Education from the Bishops of Ontario, Renewing the Promise (2018) the role of Catholic schools in forming joyful disciples is expressly emphasized:

“Our Catholic schools help to form joyful disciples as hearts and minds are opened to the transforming love of God and to the flame of faith in action. On a daily basis, Catholic schools demonstrate the joy of believing and witness the Good News to the communities that they serve.”

This is as true now as it was at the very beginning of publicly funded education in the province.  A testament to this can be seen in the life and writing of Mr. Cornelius Donovan, one of the first provincial inspectors of Catholic schools in Ontario.  Cornelius Donovan was both a product of the Catholic school system and an educator within it.  The son of Patrick Donovan and Mary Ann McCarthy, he was born on October 16, 1847 in Hamilton, Ontario just weeks after his parents arrived in Canada from Ireland.  He attended St. Patrick’s School in Hamilton; established in 1856 with St. Mary’s School as the first two Separate Schools in the city.  At the age of fifteen Donovan finished his primary education and apprenticed to the printing trade.  He worked for twelve years in the printing office of the Hamilton Times, during which time he helped found the printer’s union.  He served as president for a term with the union and was also president of the short-lived Trades Assembly.  He is credited as being a driving force in securing pay equity for printers in Hamilton.  However, Donovan’s true vocation was that of an educator.  While working as a printer he completed his teaching degree, graduating in 1873.  He then became the Principal of his Alma Mater St. Patrick’s School.  Two years later he was appointed Headmaster of all Hamilton Roman Catholic Separate Schools. Between 1877 and 1881 Donovan completed his Bachelor’s and Master’s degrees from the University of Toronto. In 1883, he resigned from his position as Headmaster due to poor health.  Following a year recuperating in Colorado, Donovan returned to Hamilton and was appointed a Provincial Inspector of Separate Schools.

In his 1893 annual report as a Provincial Inspector, Donovan provided a glowing review of the schools in the City of Hamilton, noting that they were well appointed in terms of building accommodations, class sizes, and teaching abilities.

Cornelius Donovan’s annual report on the status of separate schools in the City of Hamilton, The Catholic Register, February 2, 1893

Cornelius Donovan remained in his role as Provincial Inspector until his death on January 15, 1895, at the age of 47.  His contributions to Catholic education were significant as is noted in the tribute made to him by the Separate School Board following his death:

“The members of the Roman Catholic Separate School Board desire to express the sincere grief which they feel and the deep loss which they have sustained by the lamented demise of Cornelius Donovan in the prime of life ….  To fine talents were added great industry and a strong sense of duty, and those qualities he employed with enthusiasm in the cause of Catholic education. His was indeed a labor of love…”  (The Catholic Register, January 31, 1895)

A biography of Cornelius Donovan published in the Cathedral Magazine described him as an individual who “did more for the Separate Schools of Ontario, and particularly of Hamilton, than any other layman, and whose system of teaching, which included teaching the children how to teach themselves, produced the most remarkable results.  To this day his former pupils revere his memory, and thank him for an education that was thorough, both in heart and mind.” (“Cornelius Donovan:  Printer, Teacher, Educator”, Cathedral Magazine, republished 1924 in Journals and Transactions of the Wentworth Historical Society, Vol 11)

In addition to his dedication to the Separate School system, Cornelius Donovan was active in the life of the Catholic Church volunteering in many capacities with St. Mary’s Church in Hamilton, acting as Secretary for the St. Vincent de Paul Society, and President of the St. Patrick’s Society.  He also served two years as the alderman for St. Patrick’s ward, working for the social good of his community.

In 1869, Cornelius Donovan married Sarah McDonnell. They had ten children, two of whom went on to become priests:  Rev. C.F. Donovan, a priest for the Archdiocese of Chicago and Rev. Patrick Joseph Donovan, who served in the Diocese of Hamilton and followed in his father’s footsteps working briefly as the Superintendent of Separate Schools in Hamilton.

Cornelius Donovan’s faith inspired two of his sons to enter the priesthood.  His son Rev. Patrick Joseph Donovan also worked as a Superintendent of Separate Schools.

Cornelius Donovan had a penchant for literary endeavors.  He published four historical sketches:  Anecdotes of Ireland, Outlines of English History, Outlines of Canadian History, and History of Napoleon III. He was a regular contributor of letters to the Times under the pseudonym “Clancahil”.  He was also the publisher of a Catholic literary periodical The Lamp and founder of a periodical of Irish literature titled The Harp.

A treasured item in the Bishop Farrell Library & Archives collection is a writing ledger belonging to Cornelius Donovan.  It contains drafts of his published articles, as well as other thoughts and “scribblings”.  It shows great insight into the values and working process of this well-loved educator and Catholic faithful.  This includes his writings on Irish history, the City of Hamilton, and biographies of “the world’s warriors” and “giants of modern warfare” such as Alexander the Great, Julius Caesar, Charlemagne, and Napoleon Bonaparte.

The writing ledger in the Bishop Farrell Library & Archives contains notes for Donovan’s published  works, “The Kings and Kingdoms of Ancient Ireland”, 1874 (I01.001.001)

In his writings on “The Separate School Question”, he advocates for maintaining publicly funded Catholic schools:

“If a Catholic parent that has the temporal and eternal welfare of his children at heart, the question of the existence of Roman Catholic schools, in these Provinces, might be a question of great interest and solicitude to him.  That his children should be instructed in the doctrines and truths of our Holy Religion should be his first care, and his own judgement must tell him that Catholic schools… cannot but be the best institutions for attaining the desired end.  Even in these schools, in addition to their religious training, pupils are taught the different branches of worldly knowledge, and the parent thus enjoys the satisfaction of his child having an opportunity of acquiring both religious and secular education.” 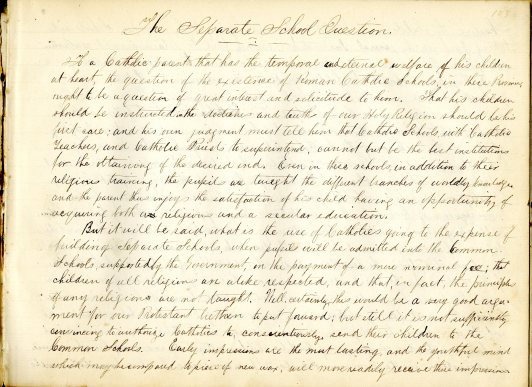 In the “St. Patrick’s School Boys Song”, the joy of community and living a virtuous life are happily professed:

“We’ll sing today a glorious song  And sound it forth right merrily We’ll sing it too with voices song And hearts and minds so cheerful It’s of the school we love so well – Where knowledge, truth, and virtue dwell The school whose aim is to excel St. Patrick’s School for me.” 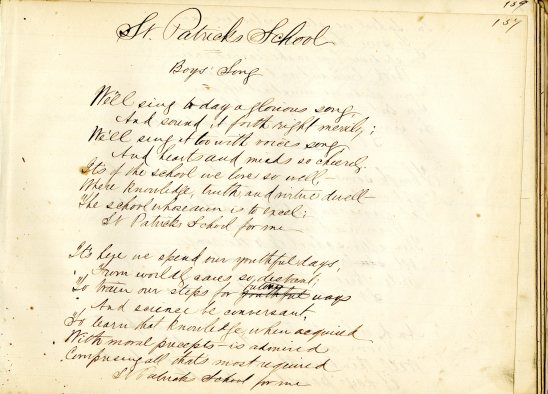 As we spend the week celebrating the significant contributions that Catholic education continues to make to the community, the province, and the Country, the life of Cornelius Donovan may be held up as an example of joyful discipleship.  The Cathedral Magazine recognized in Cornelius Donovan a man that “lived his faith day by day, and … nourished the seeds of faith … in the minds and hearts of the Catholic children of Ontario.”  Let us remember his contributions and encourage all working within our Catholic schools, as they continue to support young people to use their gifts for the good of their communities.

Archives:
By appointment only
Join 26 other subscribers